Since its release on May 15, the movie “The Real Exorcist” has topped the weekend box office in Japan for 5 consecutive weeks. To commemorate its box-office success, a special event was held at a movie theater in Tokyo. Three cast members of the film―Yoshiko Sengen, Mirai Irako, and Ryuichi Ohura―greeted the audience from the stage with strict social distance measures in place.  In April 2020, movie theaters in Tokyo were forced to close due to the spread of the new coronavirus. “The Real Exorcist” reopened in theaters in May right after the Japanese government lifted the emergency declaration. 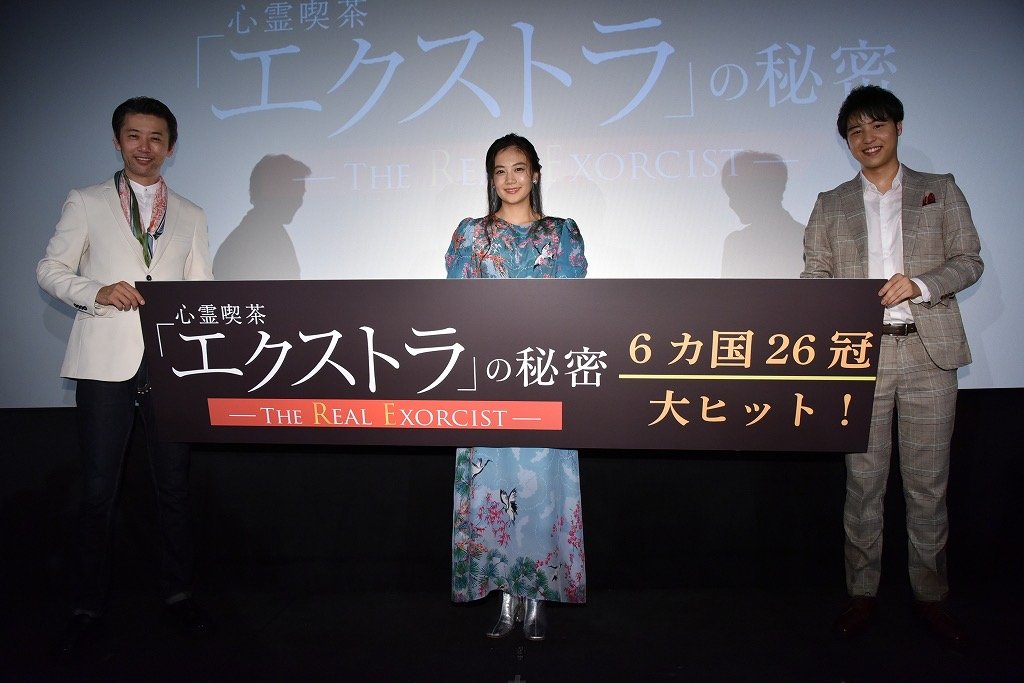 During the special event, Yoshiko said, “I am happy to be able to spend time with everyone here today, at the first stage greeting ever in Japan (after the emergency declaration was lifted)! Only half of the seats are occupied due to social distancing, but I can tell everyone is doing well!”

Yoshiko explained, “The main character, Sayuri, helps solve spiritual issues as an exorcist while working part-time at the cafe ‘Extra.’ It is a movie in which we fight invisible things, and that’s exactly the situation we are in right now. This is a positive movie that fights against invisible beings.” About her acting, she commented, “To deal with invisible existence, I think it’s important to act with a true heart and sincerity. To strengthen my mind, I trained my body first. I decided to train my muscle and run at least 3 kilometers every day while listening to the theme music of “Rocky.”

Mirai Irako plays Isamu, a college student who helps Sayuri. He said, “I got a good role that let me make the most of what I have now. The most spectacle scene is,” he explained, “the last scene where we fight against the devil. I really had to give my best as an actor, and it was also a personal battle that put my physical strength to the test.” 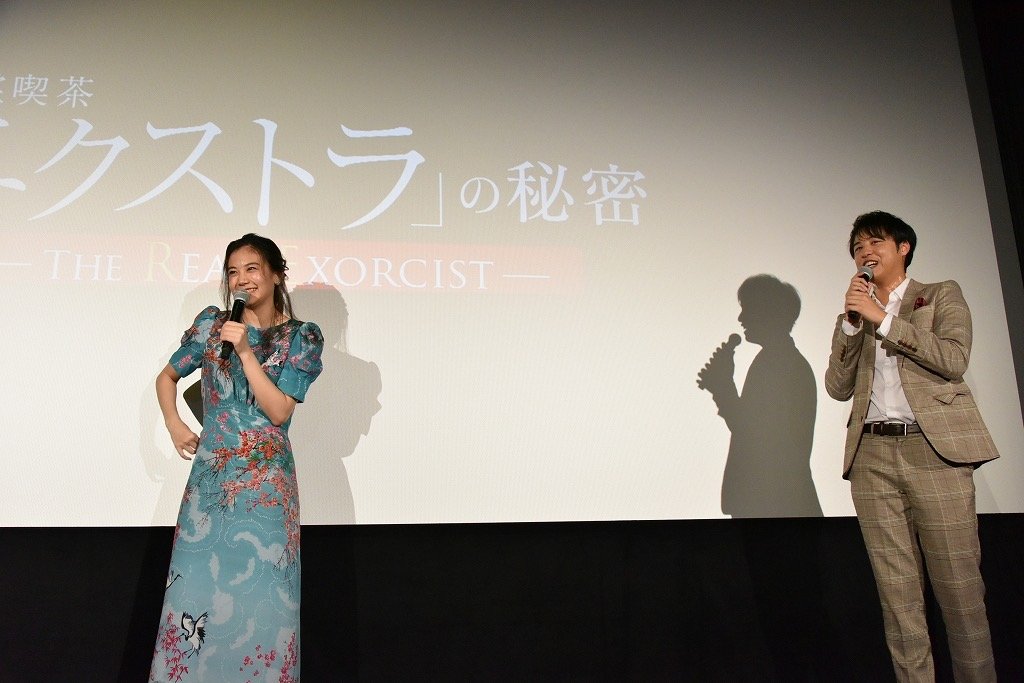 It was the first time for Ryuichi Ohura to play the role of a ghost in his life. Asked about his role, he said, “It would be lonely to be in a situation in which we can’t communicate with anyone, and nobody can even hear our voice. I feel very glad to be able to be on stage here today and hear your responses.” Yoshiko responded with a joke, “Ryuichi wasn’t transparent when we shot the scene, but when I saw him in the film, he was transparent! I was astonished to see how a long acting career can make someone transparent! If I continue my acting career for 20 more years, maybe I can also become transparent… so I really respect you!” The audience responded to her joke with a big laugh.

Asked about the film winning awards at film festivals in many countries including Monaco, Nigeria, India, the United States, and the United Kingdom, Yoshiko shared her thought, ” I thought that the message of this movie is universal. The importance of gratitude and faith in God reached the hearts of people regardless of their religions or languages.” Mirai added, “It means a lot to have won awards at a difficult time with the spread of the Coronavirus. I felt that many people are seeking help, and I am happy that this movie will spread around the world.”

In response to the question regarding her secret, Yoshiko surprised the audience by revealing her secret, “I am in love now!” Her answer took the audience by a big surprise. And with a big smile on her face, she said, “Who am I in love with? … God!” while pointing her finger to the heaven. It greatly lived up the event.

Yoshiko concluded her greeting by saying, “I didn’t think I would find the world in this kind of situation in a year after I finished shooting the film. But there is something that remains the same as when I was shooting the film, which is my wish for those feeling lost or worried to find the light of hope by watching this film. This movie shows that each one of us has the power to stand up and solve our problems. Human beings are powerful existence. My wish to convey this message won’t change. I hope that more and more people in Japan as well as around the world will watch this movie.” She said with high hopes for the success of the film.

The event concluded with the cast and audience together praying for a further box-office success of the film.

The film is scheduled to come to theaters in North America in Summer 2020.